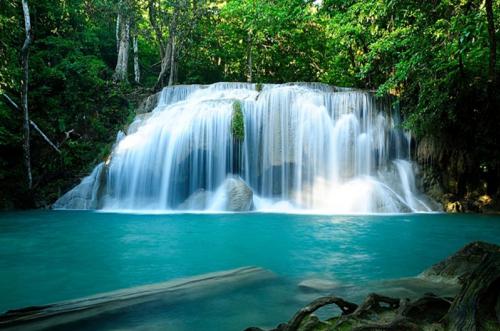 The most popular and best visited 7th level waterfalls .The shapes of the topmost fall is said to resemble Erawan. The 3 headed elephant of Hindu-Buddhist mythology. You can do a soft trekking by 2 km. trail to the top level .The trails weave in and out of the numerous pools and falls, sometimes running alongside the water, sometimes leading across footbridges. Wear good walking shoes or sneakers. Also bring a swimming suit as several of the pools beneath the waterfalls are great for swimming. Hellfire Pass was the name the Prisoner of war(POWs) gave to the largest of a 1,000 meter series of mountain cuttings through soil and solid rock, which were accomplished with minimal equipment(3.5 Kg. hammers, picks, shovels, steel tap drills, Can baskets for removing dirt and rock, and dynamite for blasting). The prisoners called it “Hellfire Pass” because of the way the largest cutting at Konyu looked at night by torchlight. In 1988, The Australian-Thai of commerce completed the first phase of Hellfire Pass Memorial project. The purpose is to honor the allied POWs and Asian laborers who died while constructing death railway. 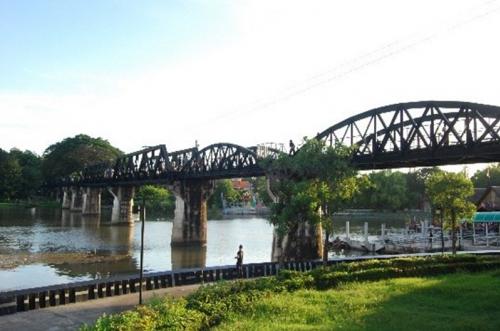 The first version of the bridge was completed in February 1943, was all wood in April of the same year, a second bridge of steel was constructed. It was in use for 20 months before the allies bombed in 1945. It was rebuilt after the war the curved portions of the bridge are original. 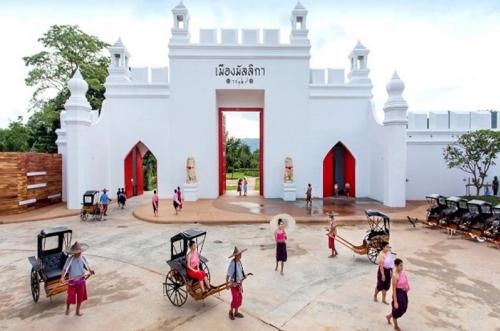 Mallika is the retro-city reflecting the past Siamese lifestyle in the Chao Phraya River Basin. During the reign of King Chulalongkorn, Rama V (1873-1910 A.D.), the people’s way of life in 1905 A.D. was plentifully changed. The most pronounced was the abolition of slavery. When freed, these former Siamese slaves had to live and earn a living by themselves without control and supports from their noblemen and masters anymore. They had to live a life of self-sufficiency, self-reliant, and in harmony with all other Siamese people. These changing patterns of lifestyle are the cornerstone of today’s Thai people. 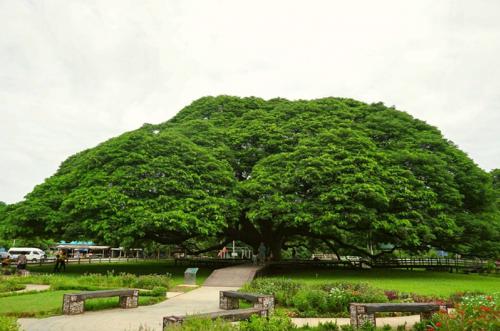 A giant specimen near Kanchanaburi , Thailand, known locally as chamchuri-yak (จามจุรียักษ์). "Chamchuri" is the Thai name of the tree species, whereas "yak" is the Thai pronunciation of yaksha, a mythical demon, referring in this context to the monstrous size of the tree. 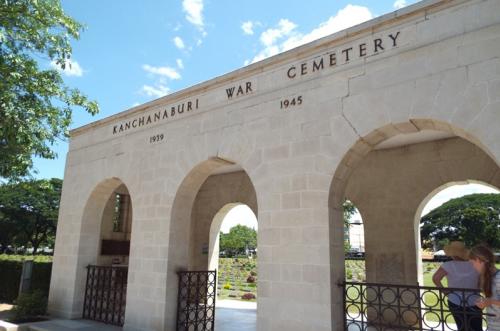 The Kanchanaburi War Cemetery (known locally as the Don-Rak War Cemetery) is the main prisoner of war (POW) cemetery for victims of Japanese imprisonment while building the Burma Railway. It is on the main road, Saeng Chuto Road, through the town of Kanchanaburi, Thailand, adjacent to an older Chinese cemetery. The cemetery was designed by Colin St Clair Oakes and is maintained by the Commonwealth War Graves Commission. There are 6,982 POWs buried there, mostly Australian, British, and Dutch. It contains the remains of prisoners buried beside the south section of the railway from Bangkok to Nieke, excepting those identified as Americans, whose remains were repatriated. There are 1,896 Dutch war graves, the rest being from Britain and the Commonwealth. Two graves contain the ashes of 300 men who were cremated. The Kanchanaburi Memorial gives the names of 11 from India who are buried in Muslim cemeteries. Nearby, across a side road, is the Thailand–Burma Railway Centre about the railway and the prisoners who built it. There is also a Dutch Roman Catholic church nearby – Beata Mundi Regina. 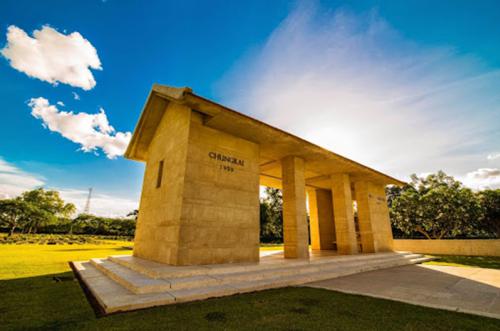 The cemetery occupies the site of the Chung Kai which once was the prisoner of war camp. Smaller in size, the cemetery attracts visitors to see its peaceful, well-designed landscape where 1,740 POWs rest in eternal peace. 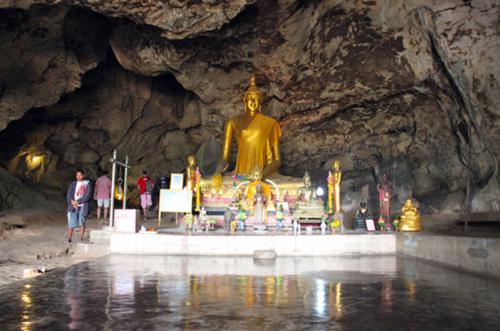 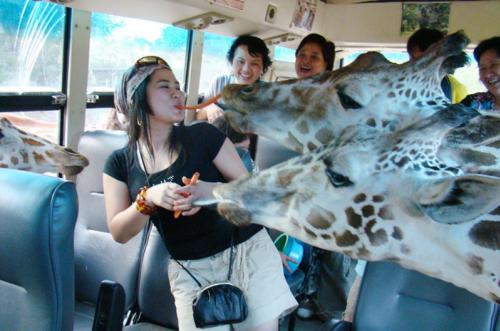 Safari Park Open Zoo It is the first open zoo in Kanchanaburi. Located in Bo Phloi District Away from Kanchanaburi town 40 kilometers, is a small open zoo that looks like Safari World. By dividing different sections into 8 open zoo zones. The riverside hot springs, discovered by Japanese soldier during World War II is some 130 kilometres from Kanchanaburi. The mineral hot water .You can relax your body and good for your health or you can do Thai massage nearly the hot spring. Sai Yok Noi Waterfall (Namtok Sai Yok Noi) is also dubbed as Khao Phang Waterfall. It is situated 60 kilometers from town via Highway No. 323. The place is best visited between July and September. 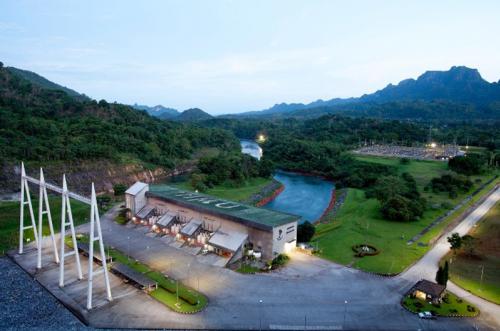 Vajiralongkorn Dam Was originally called Khao Laem Dam It is the first stone filling dam in Thailand that is coated with reinforced concrete. Located on the Kwai Noi River Is a multi-purpose dam with the main objective of generating electricity Built to block the Kwai Noi River in Tha Khanun Subdistrict Thong Pha Phum District Karnchanaburi The reservoir is located in Thong Pha Phum district and Sangkhla Buri district, Kanchanaburi. Construction started in March 1979 The dam has a capacity of 8,860 million cubic meters. The average amount of water flowing into the basin is 5,369 million cubic meters per year. Install 3 generators in the discharge area. The capacity of 100,000 kilowatts, total production capacity of 300,000 kilowatts, gives an average of 760 million kilowatt hours of electricity per year.